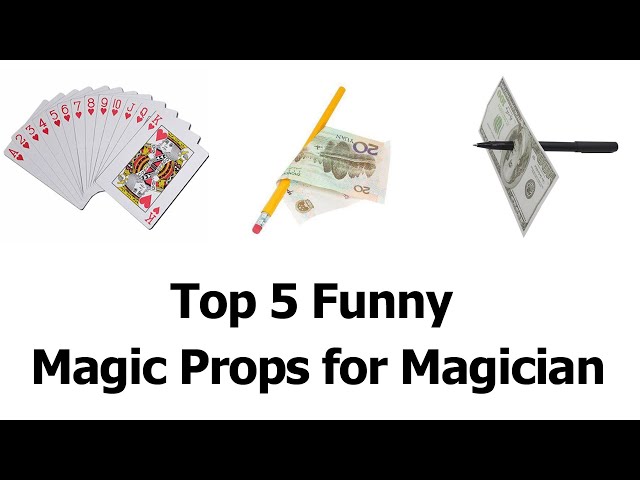 Magicians like magic tricks that are easy to perform and have a sense of humor, which makes it possible for them to show it to children in their shows. Today, I will introduces you to 5 such magic props, of course, showing humor depends on the ability of each person.

These magic props have some that are very popular and work well, some of which are less well known, but great for performing, others that are bullshit (in my opinion), but some people will like it.

This is one of my favorite magic props because of its humor in performing, magicians will pretend that they are showing the audience the secret of magic tricks, but in fact, they are performing and doing they are surprised.

With this performance, 99% of the audience will laugh when watching the magician perform. This props can perform for both children and adults, and believe me, sometimes children’s observations are better than those of adults.

It is worth noting that sometimes the audience became very surprised when watching the performance of this props at the beginning, at this time the magician has not used the secret of the magic props, it is simply few tricks with the position of the hand.

I am sure if you are reading these lines, you must know David Copperfield, the most famous and wealthy magician in the world. David Copperfield used to perform many magic tricks that surprised the world and he also performed small and interesting magic props like this.

In my opinion, out of the 5 magic props that I mention, this is the best magic effect magician, whether in real life or on video. An important point that I think many magicians like the most in this magic prop is that it can be comfortably checked by the audience.

And in some cases, magicians can borrow both pencils and audience money to perform. This takes the level of magic tricks to a new level, making the audience more surprised and puzzled than ever.

I have to admit that this magic props are really stupid, even any magician who knows how to fan cards, he can do this magic tricks with the same effect without using magic props. The problem is, in a way, many novice magicians like this magic props? I really do not understand why!

If you know about it, then this magic props is a nightmare for magicians to perform. It’s too small to perform on stage, and if performing it on the street, it requires you to throw the cards to the ground, of course, you can put it in your pocket, but it looks weird.

And the most important thing, the effect of this props, turning a deck of cards from big to small, sounds interesting, but the way it is done is going to lose that fun, it’s hard to make an audience surprise with this magic trick. I have searched many online videos for magicians performing this magic props and hope to find a performance that improves this, but I did not find it.

This was the first magic prop I ever knew, if I remember correctly, it was revealed secretly on television, at that time I was still a child, I think it must have been 15 to 20 years ago.

But the interesting thing here, when they reveal its secrets on television, they only reveal the most basic, and the pens sold at magic shops have a “secret” inside the secret, this makes it possible for your audience to check it out after the performance.

There are several versions for this magic props, I think the magicians have tried to make this traditional magic prop  into something more wonderful than its original version. It also surprised a lot of audiences, just like me before, because they always thought they knew the secret, but they really didn’t. If I had to choose a magic props (from these 5 props) to always carry around with me and perform, this magic pen would be the one I chose.

Fire Pen: The power of chemistry

This is a fairly new magic item (actually it has existed for a long time, but if compared to other props it is still new), this item is a great gift for magicians like to perform mentalist tricks.

Imagine, when the fire was lit, where the fire passed, every line of words vanished, leaving only the prophet words of the magician about the cards the audience chose, that was enough to surprise the audience?

And actually, this pen does not appear in the performance, every prediction, every character is prepared, so you can completely confidently perform without fear of being revealed secrets, because from beginning to end the audience did not see this magic props pen.

I’m not really good at chemistry, I don’t know the principle of this magic props, but I know that this will be an indispensable mentalist magician, a great combination of magic and chemistry.

And those are 5 funny and interesting magic props for magicians, I believe that most people know about them. These are magic props that I have seen other magicians perform on their shows many times, one of which is also performed by one of the most famous and wealthy magicians (who everyone knows who) in the world.