Top 5 most amazing magic props that any magician should have 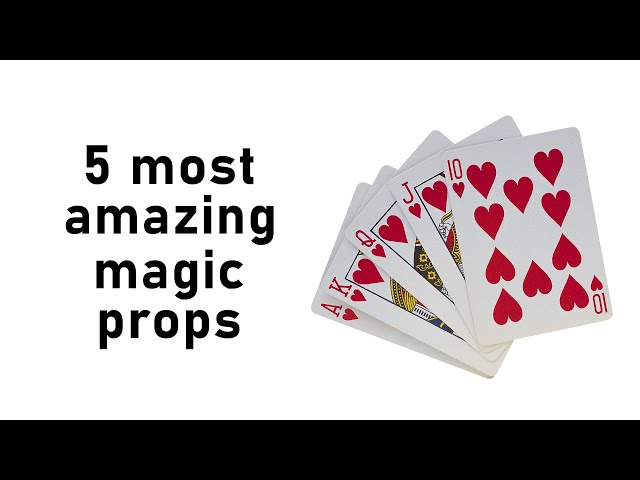 Magic props are an indispensable thing for magicians, it makes magicians perform incredible tricks and surprise the audience. Here is a list of 5 magic props with the most amazing effects that any magician should have.

The Svengali Deck was my first deck of cards when I learned magic, this deck was invented over a hundred years ago, and after years of learning magic, known many interesting tricks in magic, I got Svengali Deck is still the most effective deck of cards when performing. I believe many magicians have the same opinion as me, Svengali Deck can be said to be a deck of cards that will bring the utmost surprise to the viewers, especially the final transformation effect, everyone screams when watch it.

Svengali is a 19th-century term for a person who can control and manipulate others, which is why magicians call this deck Svegali Deck, because this is a deck that gives The magician has complete control over the cards. One of the best effects of the Svengali Deck is to turn a deck of cards with a lot of different cards into a deck that all the cards are the audience’s pick.

Stripper Deck: The deck of “masters”

Stripper Deck is a great magic props, it is an almost indispensable thing for magicians, it can be considered a “legend” in all magic props that you know and will know. . Stripper Deck gives you the ability to control your deck like a master.

Thumbtip: The most classic magic props

Around 1880, Professor Herwin invented a thumbtip based on ideas from another magician’s magic props. Professor Herwin is not only a magician, a professor, but he is also a mechanic, which is an important factor that helps him have the advantage in creating magic props, as well as improving the Magic props have been there before, laying the foundation for future magic.

Professor Herwin has invented many magic props throughout his life, but his most famous invention is Thumbtip, a magic props known and used by every magician in the world, to this day. The magician will tell new people, if you do not know Thumbtip, you do not really know magic.

PK Ring is a perfect magic props, a great accessory for magicians, this magic props is perfectly disguised as a ring, no one can doubt a ring can. do many amazing things like that. According to information from a reputable magician website, the first PK Ring was designed by Magicians for Magicians.

When you own a PK Ring, you can do many different magic tricks, all depending on your imagination, you can change the bill, disappear the coin, make the coin through beer cans, make bottle caps to pass through beer bottles, stopping the clock … and much more. PK Ring is like a treasure for you to discover, it helps you easier for you to do the magic tricks.

It can be called a PK Ring is magic props, can also be considered as an accessory for magicians, because today, many magicians create new magic props, the magic props need PK Ring to can be perform well. That is one of the many reasons PK Ring has become one of the most famous and best-selling magic props.

An interesting fact about the PK Ring, because it is made of 100% magnet, PK Ring is easy to break when faced with strong impacts. The most reason magicians buy a new PK Ring, not because the previous ring is old or lost, but 99% of that ring … broke.

Invisible Thread: Everything can float

Invisible thread, also known as IT, are a type of thread that under most light conditions, the audience will not see, which helps magicians perform the magic tricks that make small objects float. Invisible thread requires a combination of a adhesive called Wax, which is used to stick two ends of the thread, one end with objects and one with a magician.

The items commonly used to perform with invisible thread are cards, cigarettes, rings, bills, it all depends on your creativity. Invisible thread are a great magic props, however, they are hard accessible to novices magician, because it requires delicate feel and needs practice. (you are hard to see it, so you must feel it).

Not only used in street magic, invisible thread are sometimes also used for stage magic, but very rarely, the use of invisible thread on stage requires an extremely sophisticated design to create flying, moving effects that may surprise the audiences. The invisible thread is a great magic props and it’s cheaper than most other props, you can even extract the invisible thread by yourself from certain socks.

And those are the 5 most amazing magic props that I know, these are ranked based on criteria such as effects, popularity and practical applicability. And which of the 5 props do you like best? Or do you know of any other interesting props I’ve missed, let me know.